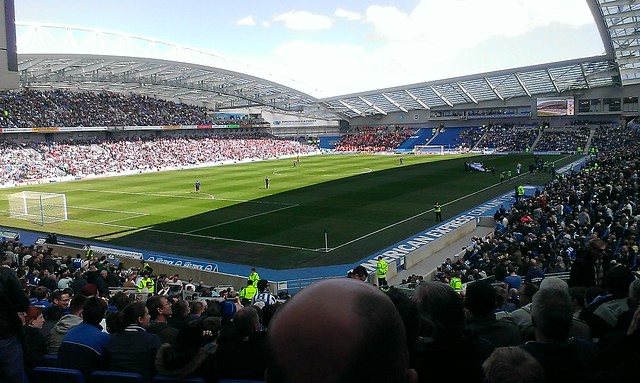 “The AmEx at Brighton and Hove, ready for 2018/09 after last season’s impressive survival” (CC by 4.0) by Jonathan Rolande

In anticipation of the 2018/2019 Premier League season’s kick-off between Manchester United and Leicester, at 20h00 on August 10th at Old Trafford, we’ll be taking a more in-depth look at the 20 squads that’ll be competing this year. In this second instalment, we’ll take a look at last year’s new boys on the block Brighton & Hove Albion and one of last season’s surprises, 7th-placed Burnley FC.

At the start of last season, many Premier League followers would have placed Brighton & Hove Albion among the teams to relegate at the end of that season, but the Seagulls proved resilient. With a good defensive record for a newly-promoted outfit (10 clean sheets) and a strong form at home (29 out of their total 40 points came from home matches), manager Chris Hughton led Brighton to a 15th spot and another season in the Premier League.

Several of the players brought in at the start of the 2017/18 season will be forming the foundation of the squad that will most likely have to battle to avoid relegation again this season. Players like midfielder Davy Pröpper, attacking midfielder Pascal Gross, and goalkeeper Mat Ryan proved to be crucial pieces of the puzzle, in combination with several players that helped Brighton to promotion the year before, such as central defender Dunk, creative midfielder Knockaert, and veteran striker Murray. So far, this season’s biggest incoming transfers are Lille’s Yves Bissouma, a young holding midfielder, Red Bull Leipzig’s Brazilian left-back Bernardo, and Deportivo striker Florin Andone.

The filling in of some of Brighton’s positions seems a bit up in the air up until now, but it looks like Chris Hughton will be employing a 4-4-1-1 formation that is largely similar to last year’s preferred set-up. New guys Andone and Bernardo look likely to slip into the starting 11, though it might be a few weeks before Andone definitively takes Glenn Murray’s spot up front. In the case of Bernardo, he could be good for FPL managers, but it remains to be seen how and on which side (he’s a left-back, but can play on the right as well) he will exactly be deployed. Last year’s central defensive pair of Dunk and Duffy looks likely to remain intact, backed up by new signing Leon Balogun, who played a decent World Cup for Nigeria this summer. The creativity in the team will be coming from Gross (who provided a lot of the quality in the team last year), Knockaert (who finished last season better than he started it), and the confident Izquierdo, while Dutch midfielder Pröpper might be placed in a more advanced role from where he can assist the attack. The deployment of record signing Jurgen Locadia is definitely something to follow, but still unclear for the moment.

The Seagulls look set for another season in which survival is the priority. If Hughton can manage to build on last season’s strong points and improve on the weaker points, such as the away form and their goalscoring, this season could be more comfortable though, and Brighton’s Premier League status could be extended by at least a year well before the end of the 2018/19 season. Still, if you’d ask the manager now if he’d sign for a finish as 15th this season, he’d probably do so.

After last year’s impressive introduction to the Premier League (scoring 7 goals, assisting 8, and bringing in 164 FPL points), Pascal Gross will be the focal points for many of Brighton’s attacking moves. Though he’s not expected to replicate his performances from last year, especially as opponents will by now have taken notice of his qualities, he can be expected to be involved in many of Brighton’s goals. The presence of Knockaert, Izquierdo, Locadia, and Pröpper is likely to spread an opposing defense’s focus, with a bit more space and time for Gross as a result. He might be taking over penalty duty from Murray and he’s behind many set-pieces as well, so £7.0 might prove to be a steal.

For the number 9 position, Hughton is likely to be starting Romanian striker Florin Andone, though something of a rotation scheme with ever-green Glenn Murray wouldn’t be a surprise. From an FPL point of view, it’s important to know that Andone is priced at £5.0, which means that the Brighton squad might contain a serious starting budget enabler. Probably not being on penalties obviously doesn’t work in his favour. Murray scored a more than 12 goals last season, but several of those were penalties. Andone is new to the Premier League, but nevertheless, a potentially starting number 9 with experience in top European football for so little money should definitely be on your watchlist.

Another interesting FPL asset can be found in Brighton’s goal, where Australia international Mat Ryan showed himself as a young, reliable goalkeeper with qualities that can win his team points. Ryan will now be going into his second season at England’s top level and there are no signs of him not having another good year. He’s a nailed-on starter for Chris Hughton’s side and at a price of £4.5, we expect him to find his way into plenty of FPL squads.

Ever since Burnley promoted to the Premier League three years ago, the Clarets have been one of the most disciplined teams in the league. Manager Sean Dyche managed to create a footballing unit that is very difficult to break down, even for the big teams. The club has been performing brilliantly in the Premier League, with a 7th-place finish and the reward of European football as a result last season. Burnley’s defensive assets especially have attracted plenty of attention over the past seasons, as they offered chances of getting relatively inexpensive starters who regularly bring home clean sheets and that’s even after selling star defender Michael Keane to Everton in July 2017.

Sean Dyche is expected to line up the team in his preferred 4-4-2 formation, which allows him to create a solid unit on the midfield, backed up by a physically imposing no-nonsense defence and two hard-working strikers up front. The question for the first half of this season will be how well Dyche’s men manage to cope with the added intensity of playing in the Europa League. This is an unusual situation for the club and it will be interesting to see how they’ll perform in Europe without it negatively affecting their structure, discipline, and energy in the Premier League.

So far, the Clarets haven’t brought in any new players of name and they haven’t seen any key players leaving either. It looks like the defensive unit will consist of Stephen Ward, James Tarkowski, Ben Mee, and Matt Lowton, with Gudmundsson, Cork, Lennon, Hendrick, Defour, and Brady fighting for the midfield spots. Iceland international Gudmundsson and Jack Cork seem nailed-on starters again this season. Up front, Hughton will be choosing between Chris Wood, Ashley Barnes, and Sam Vokes to fill in the two attacking spots. Barnes seems to be set as a secondary striker, while the number 9 position will go between Wood and Vokes.

Burnley have been given a relatively kind start to the 2018/19 season in terms of fixtures, with Watford at home, and Southampton, Fulham, and Wolves away in the first five gameweeks. It remains to be seen how active the club will be in the final weeks of the transfer window, but as it stands, Burnley will be basing their play on a solid defense and a high work rate all around. With a few good results in the opening weeks, the manager might once again be able to forge a successful and hard-to-overcome unit at Turf Moor. For FPL managers, this means: a collection of reliable and relative bargains, especially in the defensive area.

As mentioned earlier, the striker position is between Sam Vokes and Chris Wood, though the latter looks more likely to start the season in the starting eleven. Last season, the New Zealand attacker managed to score 10 goals despite spending just 1’600 minutes as part of Premier League action (mainly due to injuries). This is all the more impressive when you realise that Burnley as a whole put just 36 balls in the back of the net. At a price of £6.5 in the official game, Wood could be a good third or even second striker if your strategy is to get the big hauls from somewhere else on the pitch.

On the midfield, Iceland international Johann Berg Gudmundsson might be an interesting FPL asset. The speedy midfielder/winger scored 2 goals and provided 9 assists last season, which won him a more than decent 117 points in FPL, especially considering his price at the time of just £5.0. This season, his price was increased to £6.0, which is still acceptable if he manages to replicate last season’s performance. Gudmundsson is a sure starter for Sean Dyche, which makes him a good option for the position of 4th or 5th midfielder in your FPL squad.

Burnley’s goalkeeper situation is still unclear, as both Nick Pope and Tom Heaton are top-class goalies who both deserve the spot. As the pre-season hasn’t shed much light yet on Sean Dyche’s eventual choice, we’d instead like to highlight James Tarkowski as someone to place on your watchlist, at least. Tarkowski had a great season last year as he managed to keep any potential negative effects of star man Michael Keane leaving (for Everton) to a minimum. As a result, he was selected for England’s 30-man squad for the World Cup this summer, though he finally didn’t make the cut. He’ll be fresh for the start of this season and the three men around him in defense are all familiar faces with whom he frustrated plenty of opposing attackers last season. At £5.0 he’s not cheap, but if Burnley manage to maintain their exceptional solidity and win another 12 clean sheets this season, he could well be worth it.