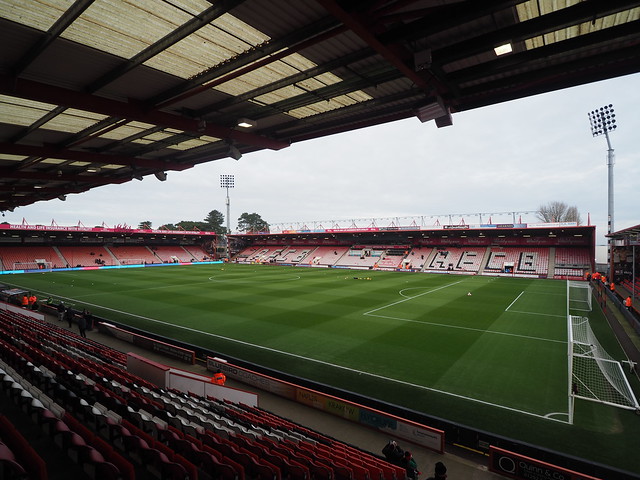 “Bournemouth’s Vitality Stadium is ready for another Premier League rollercoaster” (CC by 4.0) by Ungry Young Man

In anticipation of the 2018/2019 Premier League season’s kick-off between Manchester United and Leicester, at 20h00 on Friday August 10th at Old Trafford, we’ll be taking a more in-depth look at the 20 squads that’ll be competing this year. In this first instalment, we’ll get the ball rolling at the start of the alphabet with an Arsenal without Wenger for the first time in more than 20 years and Eddie Howe’s Bournemouth.

Arsenal could well be one of the most interesting teams to watch from a neutral point of view, as the club is currently going through some major changes at manager and player level. After 22 years of free-flowing but sometimes frustrating football, Arsène Wenger was replaced this summer by Spanish coach Unai Emery, who had moved to PSG in 2016 after winning the Europa League an incredible three times in a row with Sevilla. He’s known as a keen, almost obsessive, tactician with an attacking mindset who likes his teams to be energetic and press high in defense, with the full-backs often joining in attack and the midfielders constantly looking for the through ball. It remains to be seen how his Arsenal team will line up, but at first glance, Emery seems to have players at his disposal that fit the way he likes to play, such as Aubameyang, Mkhitaryan and Torreira. The question is how soon he can work his magic and blend Arsenal into a team rather than a collection of players? If he does from the start then the fans will think he’s a wizard because most coaches take 6 to 12 months to put their own stamp on a team. For those fans that would rather have some wizard fun straightaway then you could check out casinowizard.

Serious change is taking place on the player front as well, with Wilshere (West Ham), Cazorla (Villareal), and Mertesacker (retirement) leaving, while over the course of last season, mainstays like Oxlade-Chamberlain (Liverpool), Giroud (Chelsea), Alexis (Man Utd), Walcott (Everton), and Coquelin (Valencia) had already closed the doors of the Emirates behind them. In return, Emery, who together with current Roma sports director Monchi was known for being more than skilled at playing the transfer market at Sevilla, has already spent €30 million on Lucas Torreira (a Uruguayan defensive midfielder from Sampdoria), €25 million on Leverkusen’s experienced goalkeeper Bernd Leno, €16 million on Dortmund’s imposing Greek central defender Sokratis, and €8 million on young French midfielder Guendouzi, while Juventus right-back Stephan Lichtsteiner joined the Gunners on a free transfer. The new management is still expected to let some more players go and to bring a few other new players in before the transfer window deadline on August 9th.

As stated earlier, with so many structural changes happening at Arsenal at the moment, it’s difficult to predict the start of their season. The Gunners have definitely got the quality to play beautiful attacking football, they don’t play Champions League football this year, and it looks like they’re finally spending time and money on the more physical aspect of their game as well, with signings like Torreira, Lichtsteiner, and Sokratis. In that light, the signing of Inter’s N’Zonzi would be a major boost as well. With a home game versus Man City to kick off the season, followed by an away game at Stamford Bridge, Arsenal’s start to the season can be called “heavy”, to say the least, so Emery will want his men to be at top fitness levels and fully prepared. Facing these teams so very early in the season could be an advantage though, as both City and Chelsea will definitely feel the strain of the 2018 World Cup, meaning that many of their top internationals will not be match-fit yet.

We start up front, with Pierre-Emerick Aubameyang, the prolific Gabonese striker who came to the Emirates in January of this year and subsequently scored 10 goals in just 13 Premier League games to announce his arrival. In the official game, only Harry Kane is more expensive in terms of attackers, so expectations are high for Auba this season. It’ll be crucial to see how Emery will be using his qualities, though it seems clear that he’ll be a starter for Arsenal. He’s fast as lightning, he accelerates like few others in the league, and he can both combine with his team mates and finish clinically. At £11m, Aubameyang will take up a considerable chunk of your budget and his first fixtures are not favourable, but he looks set for goals this season and it might be difficult to bring him into your squad later on.

A Gunner who might be benefiting enormously from Arsenal’s new style of play and the influx of defense-minded players is Aaron Ramsey. The Welsh international scored 7 goals and assisted 10 last season, despite playing barely 1,800 minutes of Premier League football. The rivalry for the attacking positions will be high, with the likes of Özil, Mkhitaryan, Iwobi, Aubameyang, and even Lacazette fighting for a spot, but Ramsey seems like the type of player that Emery likes. He’s energetic, versatile in terms of his passing, and he can both score and assist as an offensive midfielder. It remains to be seen if Emery includes him in his ideal 11, but if he does, £7.5m in FPL could be a steal.

In recent history, Emery has practically always played with four in the back, so we assume that the same tactic will be applied at Arsenal. In that scheme, the role of Hector Bellerín as a raiding full-back on the right might well be translated into FPL points over the course of the season. The Spanish defender is not cheap (£5.5m), but it’s hard to see him not being Emery’s first choice on the right side of the defence. Besides clean sheets, Bellerín also offers an offensive threat, which is usually an ideal recipe for FPL gold.

Ever since returning to the Premier League, Bournemouth have somewhat been defying the odds by staying up relatively comfortably and managing to combine that feat with a determination to play nice football, despite their budget being one of the competition’s lowest. Eddie Howe likes his team to take the initiative where possible and to provide attacking threat from various positions. Even against the much bigger teams, you’ll rarely see the Cherries parking the bus in front of their goal, though Howe isn’t an attacking madman either. As a matter of fact, since Wenger left Arsenal, Eddie Howe is now the longest-serving manager in the Premier League, with more than five years of service to Bournemouth.

That also relates to one of the advantages for FPL managers when it comes to this Bournemouth side: it’s a relatively familiar side. Besides the coach and his recognisable way of playing, some of the club’s main players have been with the Cherries ever since they promoted to the Premier League in 2015, including Charlie Daniels, Joshua King, Simon Francis, and Ryan Fraser. In other words, many FPL managers will more or less know what to expect from the Bournemouth players.

As we said before, Eddie Howe likes to attack, which often leads to games full of goals. This was especially the case last season, when the Bournemouth defence was less than reliable throughout the season, with a league-lowest 6 clean sheets as a result. The club’s problem last season was that the attacking results were not always up to scratch either. They scored just 45 goals last season and Howe didn’t manage to get something of a consistency going up front, as he switched between Defoe, Stanislas and King often. King was the team’s top scorer with just 8 goals, while Ibe provided the most assists (6). With just Sheffield United’s David Brooks coming in so far, the Cherries look likely to start the season in their trademark 4-4-1-1 formation, hoping for a similar season as last, but with a bit more goals and a bit less conceding.

In attack, it looks like Joshua King will be the main man again for Bournemouth, despite a quiet 2017-2018 season. That was partly due to injury trouble though, and once fully fit again around February of this year, he started scoring, with 6 goals in 13 appearances after February as a result. King will probably be playing just off the striker, which is likely to be either Callum Wilson or Jermain Defoe (or indeed a new name), so that he can pounce on second balls inside or just outside the opponent’s area. He’s a sharp finisher and for just £6.5, he could be an ideal third striker in FPL.

Another interesting player on the Bournemouth roster is midfielder/winger Ryan Fraser. The young Scot is listed as a midfielder for just £5.5 in the official game, but is often deployed as a winger by Eddie Howe. Last season, in 2,000 minutes of Premier League football, the small dribbler scored 5 goals and provided 3 assists, which is not at all bad for a midfielder in this price bracket. He’ll be looking to improve on that in the coming season, so he’ll be fighting to cement his starting spot during the pre-season. Providing the Cherries regain some of their defensive stability, Fraser might fit well in many FPL squads as a great fifth or even fourth midfielder.

Bournemouth’s defence is like a collection of familiar faces to most FPL managers, as it looks like this season’s back line will consist of Simon Francis, Nathan Aké, Steve Cook, and Charlie Daniels. The latter, in particular, stands out as an interesting FPL asset, especially considering his down-graded price of £4.5m. Last season was definitely not his best season and Eddie Howe might decide to bring in another left-back to challenge Daniels, but the 31-year old Englishman has real FPL pedigree nonetheless. Keep an eye out for developments around his position at Bournemouth, because an attack-minded full-back with a great left foot and frequent set-piece duty, who plays for an attacking team can always be interesting especially at a good price.