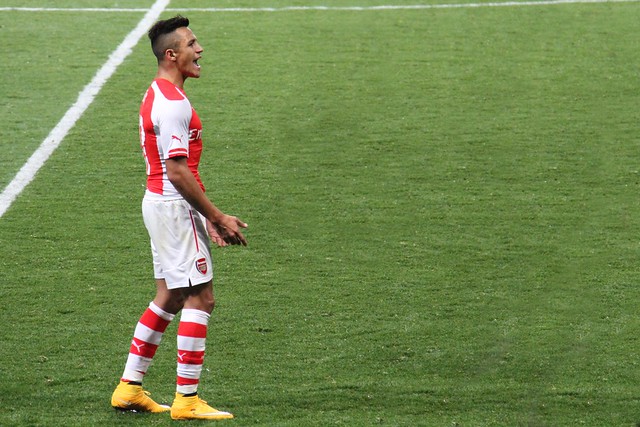 “Will Arsenal hold on to their Chilean star Alexis Sanchez?” (CC by 4.0) by Ronnie Macdonald

With the quantities of money that have been thrown around during this summer’s transfer window this year’s Deadline Day could become one of the most spectacular ones in recent memory. Incoming transfers need to have been confirmed before 11pm (BST) today, the 31st of August (outgoing transfers are still possible to some foreign markets where the transfer window closes later), so in this article we’ll take a quick look at some of the most promising confirmed transfers of today, as well as at some of the most exciting rumours. When transfers are confirmed this will affect Betting Tips and Predictions for the Premier League.

One of the most high-profile transfers on Deadline Day, at least in terms of the EPL, is Alex Oxlade-Chamberlain’s £35 million move from Arsenal to Liverpool. Chelsea’s Antonio Conté was reportedly interested as well, but AOC gave his OK to the Reds where he will be playing in a more central advanced position.

One of this window’s calmest clubs, Tottenham, also made a move on Deadline Day. After strengthening their defence with the talent of Ajax defender Davinson Sanchez the Spurs have also added PSG’s Serge Aurier to their squad for £23 million. The Ivory Coast right-back’s talent is indisputable, so it will be interesting to see if at Spurs he can avoid the off-field antics that got him into trouble at PSG on several occasions.

Swansea City might not be the club you would expect to find amongst a listing of Deadline Day’s most exciting transfers, but the Swans have struck potential gold. They agreed on an £8 million loan move for Portuguese midfield promise Renato Sanches with Bayern Munich. Sanches was instrumental to Portugal’s shock Euro Cup victory in 2016, but after a year in the shadows at Bayern the tireless box-to-box midfielder will be looking to get back into the spotlight at Swansea.

Finally, West Brom deserves a mention as well for their astute negotiating at the very end of this transfer window. The Baggies closed a rather spectacular double transfer by paying £7 million for Arsenal’s Kieran Gibbs (a bargain in this market?) and agreeing on a season-long loan of PSG midfielder and Polish international Grzegorz Krychowiak, who had moved to the French giants just a year ago for £28 million from Sevilla.

The news is flooded with rumours and while we can’t say with certainty which of them will actually lead to something (that’s why they’re called rumours) we do see some persistent news items regarding high-profile moves connected to the Premier League.

Arsenal’s Chilean star man Alexis Sanchez has been linked to practically every European powerhouse ever since he expressed doubts about extending his contract with the Gunners. His link to City has been particularly persistent and Arsenal have reportedly rejected a £53 million offer from the Citizens, but this seems like a marriage that is bound to end very soon particcularly if Arsenal can find a suitable replacement at the same time.

Another EPL star and FPL favorite that has consistently been linked with leaving the league is Liverpool’s Coutinho. The Reds have rebuffed FC Barcelona’s efforts to sign the Brazilian on several occasions, the last having a reported value of £110 million. They have branded Coutinho as “not for sale”, but can they resist if Barça decides to increase their offer again?

In case they do give in then the Reds already know who the Brazilian’s replacement should be: Thomas Lemar of last season’s Champions League semi-finalist AS Monaco. More than half of the Coutinho money would go to bringing in the French assist king, despite Monaco not being keen on selling their winger.

Also keep an eye on the news regarding Southampton’s Virgil van Dijk (the defender wants to leave and hasn’t played a minute yet this season but the club are keen to keep him), Northern Ireland international Jonny Evans (with Arsenal apparently being in pole position to sign the West Brom defender) and Leicester’s Danny Drinkwater (who has submitted a transfer request and seeks a move to reigning champions Chelsea.