A Fantasy Football forum for news on fantasy football games run by the Premierleague (FPL).
Post Reply
12 posts • Page 1 of 1

EDIT: Note this was just for fun and is NOT the team I will be using!
Also shows how much the game has evolved over the years that this tactic used to work well but now would be crap! I know many here were around bitd and remember this. For those newer to the game, it defo was the old template and took me to around 500th one season.

Following the discussion on big 5 defenders in another thread made it feel like selection is very constrained this season due to the value in defence.

To relieve the boredom and do something a bit different I’ve picked a team based on 4.0 and 4.5 defenders for rotation and spent the money I. Mid and up front.

It may not be CR7 and Rooney, but feels liberating to have 3 premiums again.

Now, where is that thread on who will be this seasons Zak’s and Valencia? 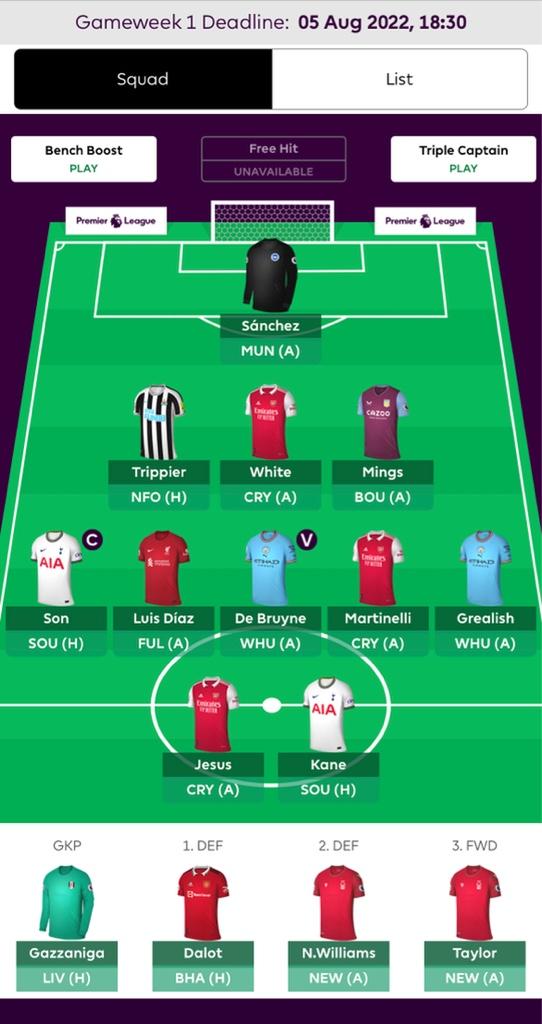 very interesting but shouldn't u chose a better 4.5 defender instead of nico since you are actually going to be using him
Top

wahine wrote: ↑27 Jul 2022, 03:32 I would be struggling to find the courage to field that team going into gameweek one
Those four defence will be lucky to match Trents totals

Trippier could get to around 2/3 of Trent's total.
Top

Trippier could get to around 2/3 of Trent's total.

But to get back on topic…

…yes I can certainly remember those days OFG, that’s exactly the sort of team structure that was the norm, back in the day. And we’d all have 2 x 4.5 rotating keepers too.

How time’s have changed.
Top

Inteesting that Terry, Lescott and Vidic all managed nearly 200 points. I guess those totals weren't predictable enough season to season, whereas the wingbacks now...are.

I seem to recall having Del Horno plus 4 rotators.
Top

Ramsey will be pleased about that.
Top
View Latest: 1 Day View Your posts
Post Reply
12 posts • Page 1 of 1