A Fantasy Football forum for news on Fantasy Football games run by the Daily Telegraph (TFF). Please post general messages about players etc that are non-specific to TFF on the 'Team News' Forum.
Post Reply
133 posts

Saturday’s early fixture features Bournemouth versus Liverpool. No Gomez for Liverpool as he’s out for a while with a fractured leg. Who’s most likely to score out of Wilson and Salah? Will Origi and Sturridge feature again?

The first of the 3 o’clocks sees Uddersfield travelling down to North London to take on the Gunners. Uddersfield are now out of the bottom 3. Arsenal are neck-and-neck with Chelsea in 5th. There can only be one winner here…

The B derby sees Burnley v Brighton. Burnley are still down at the foot of the table, Brighton are happily sat in mid-table but may be without Murray for this one. Duffy also missing due to seeing red against Palace.

Off to the Cardiff Stadium in Cardiff now for Cardiff against Southampton. 16th versus 18th equates to an early season real six pointer. Home advantage versus new manager bounce = a draw?

There’s never been a better time to play United, even if you are at the bottom of the table. Fulham picked up a draw in mid-week, as did Man U. Fred won’t be playing in this one due to a dodgy manager.

Arnautovic is injured – step up Andy Carroll (it is almost Christmas after all). Palace are in poor form at the moment so you would expect the Hammers to beat them today unless their talisman gets on the scoresheet.

The not-quite-the-late match is a top four affair featuring the might of Chelsea against the mightier might of Man City. Chelsea will be looking to get back to winning ways after their recent drop off in form. City will be without Aguero for this one.

And finally, Saturday’s late, late match sees Leicester welcome Spurs to the King Power Stadium (or the KNGPWRSTDM as it was called on Only Connect this week). Expect Harry to continue blowing doors off today. Potentially no Vardy this evening though Maddison is in fine fettle.

Just the one Sunday fixture this weekend, Newcastle against Wolves. Wolves got a morale boosting win against Chelsea in mid-week so expect this to be a hard fought contest. Newcastle's recent form has tailed off

The MNF is Everton against Watford. The Toffees are a tad goal shy at the moment but they is a glimmer of hope with Richarlison and Siggy in your side. Watford have one draw and four loses in their past 5 games.
Top

Ahh, a 4 flange saturday, what a lovely pre-christmas treat.
Top

I daren't go anywhere near it after my disastrous last few week's (or week to be more precise) shenanigans.
Top

As well as Gomez, Liverpool's defence will also be missing Lovren and Clyne tomorrow so it virtually picks itself as Robertson looks fit. TAA, Matip, VVD, Rob.

Moreno and Milner are only (unlikely) options. Young Curtis Jones and/or Nat Phillips on the bench??

Mane probably not back.

Gomez is a problem in one of my main teams. £3.5m to spend and it has to be a defender. I’m not hugely keen on the other options below that price but equally I don’t want to use 2 transfers either. Anyone else left themselves a little short on cash?
Top

Jamjack wrote:Gomez is a problem in one of my main teams. £3.5m to spend and it has to be a defender. I’m not hugely keen on the other options below that price but equally I don’t want to use 2 transfers either. Anyone else left themselves a little short on cash?

Yes. Bought him in and couldn't afford TAA or Trippier then either.
Could get Lovren but banged his head in training and will lose his place when Gomez returns.
Top

Foyth injured as well now! Just need Aubameyang to go down and that will be all three transfers I've done this week gone to pot!
Top

Well, you can wish for whatever would cheer you up after that run of bad luck

Wilson out injured .... are you kidding me!?
Top

Not sure how Liverpool will line up with only 3 defenders listed (TAA on bench, 3 injured). Mane on bench (was expected to miss completely). Salah and Bobby back. 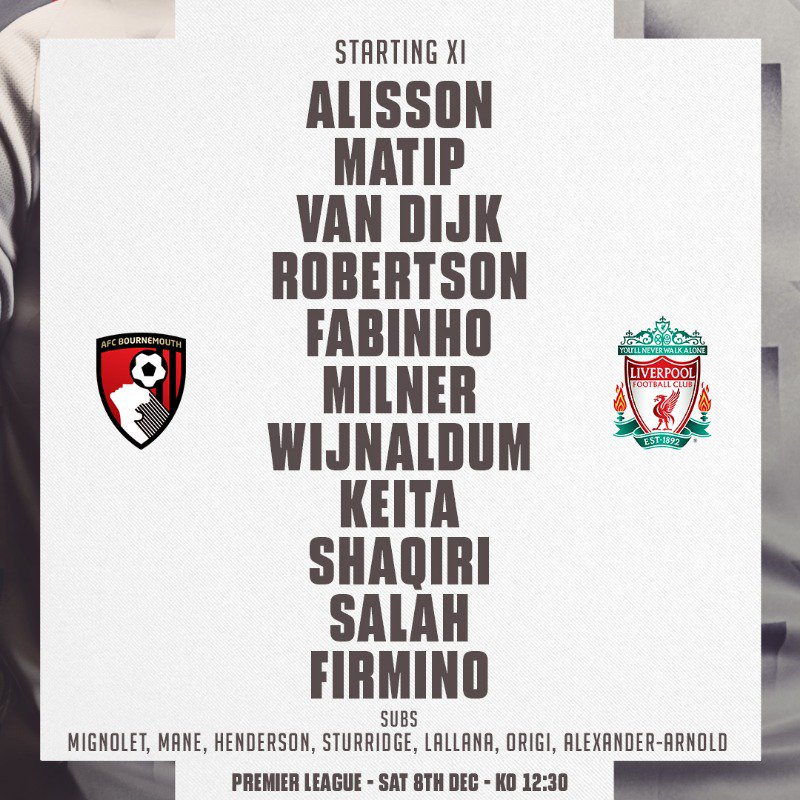 Could Milner be full-back?
Top

Think I'd rather have Milner as the right back but don't recall ever seeing him on that side. But as he's not exactly a 'get to the byline and whip it across' player when he plays full back, I would think he'd probably do ok.
Top

Milner did great 2 seasons ago at left back, he can do equally well at right back I think. Yesterday Klopp said he had a plan to rest TAA, so I immediately thought the plan is Milner for right back
Top

I'm wondering about maybe Fabinho at RB. Don't know him well enough but that may be the plan.
Top

Jamjack wrote: ↑07 Dec 2018, 23:57 Gomez is a problem in one of my main teams. £3.5m to spend and it has to be a defender. I’m not hugely keen on the other options below that price but equally I don’t want to use 2 transfers either. Anyone else left themselves a little short on cash?

Was getting Chilwell til I saw the Leicester's upcoming fixtures. Holding would have been good at Arsenal but their inability at keeping CSs means Kolasinac isn't worth £3.5m over the cheap options so I'm trawling the bargain basement to give me some funds elsewhere.
Top

actually, that is a good point! If I remember well, Fabinho came to Europe through Real Madrid young team, and back then he played right back (from a Real supporter)
Top

There goes my Arnie plan. Anyone got a plan B?
Top

Well, you can wish for whatever would cheer you up after that run of bad luck

There goes my Arnie plan. Anyone got a plan B?

There goes my Arnie plan. Anyone got a plan B?

Wish I had. I only have one up front and that’s Arnie - who do I replace him with when I only have 0.4 in the bank!!!

Could drop Hazard but Chelsea have decent fixtures coming up soon.
Top

Currently 3-5-2 formation. Is Peyeyra and Arnie to Doherty and Hazard genius or madness? Would mean 4-5-1 with Kane up top.
Top

Or Arnie to Jimenez and take a punt on him?
Top

Can't decide whether to go
A) Kane and Anderson
Or
B) Son and Hernandez
Think as it's my best team to go A as less of a gamble. But then 'he who dares......'

A. No brainer
Top

Or Arnie to Jimenez and take a punt on him?

For what it's worth I got rid of all my Hazards and don't regret it (at the moment!).
Top

Think you're right. In this game he who dares more than often ends in tears
Top

The next 4 fixtures have put him as the most likely selection for me actually. It’s a punt but so are the Wolves Leicester and Newcastle options. This one is a struggle
Top