Football on the continent. Which clubs will win the other major European leagues in 2019? -
Skip to content 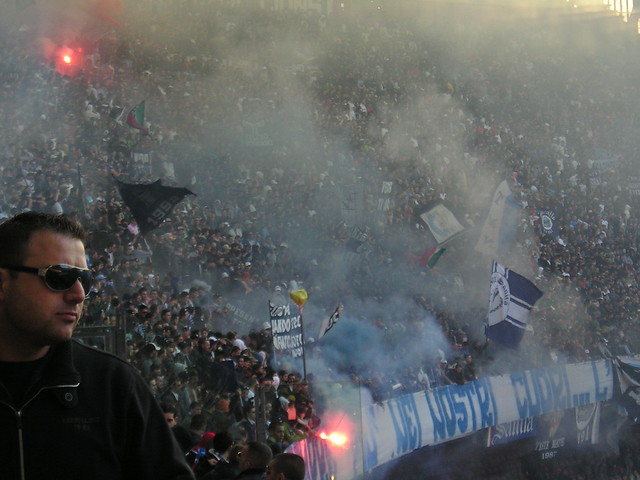 “An image from Napoli’s crackling Stadio San Paolo” (CC by 2.0) by MJwho

With the Premier League being the thrilling, though sometimes extremely frustrating roller coaster that it is every season, we would almost forget that great football is played all over Europe. Of course, we get a taste of what European football has to offer every two weeks, when the Champions League and the Europa League pitch the Premier League’s best against Europe’s finest, but the major European leagues have a lot more to offer. What to think of La Liga, where Diego Simeone’s Atletico Madrid are always underdogs in the title fight with giants Real Madrid and Barcelona? Or the Bundesliga, where teams like Dortmund and Leverkusen are seemingly unable to keep up with Bayern Munich’s dominance? In this article, we’re going to take a quick, closer look at three major leagues from the continent and the favourites for each respective title in 2019. And try this if you want to find your favourite best new casinos 2019.

La Liga (Spain)
After winning the Champions League an impressive and unprecedented three times in a row with a squad core that remained mostly unchanged during that period, the 2018-2019 campaign was always going to be a challenge for Real Madrid. World class players and Madrid icons like captain Sergio Ramos, engine Luka Modric and living legend Cristiano Ronaldo turned 32, 33, and 33 years old respectively in 2018, and the transfer of all-time topscorer Ronaldo to Juventus and the resignation of successful coach Zinedine Zidane marked the beginning of a new era for Los Merengues. Unfortunately for them though, the current season looks more and more like a transition moment for the club. After 12 games in La Liga, Real Madrid find themselves in a very disappointing sixth place, but one positive is that leaders Barcelona are somewhat struggling themselves this season and are just 4 points ahead.

The big moment for the pride of Catalonia this season was the 5-1 hammering of their arch rivals from the capital, Real Madrid. Soon after that, Madrid coach Julen Lopetegui was fired and youth coach Santiago Solari was appointed as caretaker manager until the end of the season. Barça was expected to leave this year’s occasional early-season hiccups, like the loss against modest CD Leganès and the home draw versus Girona, behind them after thrashing Real, but this wasn’t the case. A hard-fought away victory against newly-promoted Rayo Vallecano followed, but the game after that saw the La Liga giants lose 3-4 at home to Real Betis, who are currently in 14th place.

Meanwhile, challenger Atletico Madrid has kept up with the two traditional La Liga powerhouses and currently sits in third place, with 23 points from 12 games. The Colchoneros had a slow start to the season, but Diego Simeone’s fighting machine has reached cruising speed. With just 8 goals conceded so far, Atletico is proving as hard to beat as usual, especially at home, while an attack consisting of players like Diego Costa, Antoine Griezmann, and Thomas Lemar can create danger against any opponent. There are still 24 games to go in La Liga, so plenty can happen still and Real and/or Barça are bound to get back their mojo at some point, but if the two big names keep struggling to find consistency much longer, the 2019 title might be there to grab for Atletico. And try this if you want to grab yourself a casino bonus 2019.

Bundesliga (Germany)
The complete Bayern Munich dominance in the Bundesliga over the past decade or so, and indeed throughout most of German football’s history, is often a reason for heated discussion in Germany. By just looking at the estimated team values in the league, it’s easy to see why Bayern has won the title in the past five consecutive seasons, and seven times in the last ten years.

Of course, club market values don’t paint the whole picture, just look at Leicester in 2016-17, but it does shed a light on what are realistic expectations for each club in terms of results. From the above table, for example, the obvious conclusion is that Bayern almost has an obligation to become champions, considering they’re worth almost twice as much as the Bundesliga’s number two, Dortmund.

Still, like Real Madrid in La Liga this year, the Bavarian giants are having an abysmal start to the 2018-19 campaign. At the time of writing, Bayern are in fifth place in the Bundesliga, with 20 points from 11 games, and behind teams like Monchengladbach and Eintracht Frankfurt. Much like Real, Bayern seems to be experiencing something of a transition year as the core of the current squad has been together for many years and at least two of their marquee players are approaching retirement age (Robben and Ribery). From the last seven games, the Germans took just 8 points, a run that included defeats against Hertha Berlin, Monchengladbach (0-3 in Munich!), and title rivals Dortmund. For now, new coach Niko Kovac is backed by the club and it doesn’t seem likely that they will fire him any time soon, but the Croatian manager needs to find a way to turn around things in the domestic competition.

Borussia Dortmund, on the other hand, are having a great start to the season, both in terms of the football they play and the results they book. They are currently leading the Bundesliga with an impressive 27 points from 11 games and they are four points ahead of number two Monchengladbach. On top of that, the last game before the current international break was a 1-0 home victory against Bayern, which is always a bit more special than other victories.

What makes Dortmund’s 2018-2019 season even more exciting though, is the fact that they are boasting one of the youngest squads (average age of 24.8 years) at the elite European level and coach Lucien Favre is managing to make his team play an attacking, attractive brand of football. Under his reign, exciting talents like US international Christian Pulisic (20 years old), Spanish goalgetter Paco Alcacer (25) and England’s very own future-Neymar Jadon Sancho (18) have glued together and formed a serious title contender.

With Bayern off to a more than disappointing start to the season and other traditional title contenders like Wolfsburg, Schalke 04, and Leverkusen nowhere near the top of the league for the moment, the title looks like a real possibility for Dortmund. We do expect Bayern to get back to a consistent and victorious rhythm again at some point, but that point does have to come soon, considering the current 7-point gap. At the same time, the pitfall of inconsistency always exists when teams boasting a lot of young players are concerned. Bayern are Bayern and they won’t give up the title until it’s lost, but if Favre can keep his enthusiastic youngsters on the rails, the Bundesliga title for 2019 might end up in Dortmund.

Serie A (Italy)
As is the case for most elite competitions in Europe, and indeed anywhere, the Italian Serie A boasts a select group of traditional heavyweights, in the form of Juventus, AC Milan, and Napoli, for example. Over the past decade though, one club has clearly dominated the landscape of Italian football: Juventus. The bianconeri from Turin have been crowned champions of the Serie A a record 34 times since the club’s foundation in 1897 and they also own the record for most consecutive league titles: seven, between the seasons 2011-2012 and last season. As it stands at the moment, with Juve leading the Serie A after taking an impressive 34 points from the campaign’s first 12 games, it looks like the giants from Turin are going to extend their record-breaking run of 7 Serie A titles in a row by at least one more year.

Juventus finished each of the past three seasons in the Serie A with more than 90 points from 38 games, which is outstanding, but it wasn’t enough. The club wants to compete with the world’s elite, the likes of Real Madrid, Bayern Munich, and Manchester City, so €257 million was spent on fresh blood in the build-up to the 2018-2019 season. The wave of (permanently) incoming players included Portugal’s Joao Cancelo, Bayern’s Douglas Costa, and Italy legend Leonardo Bonucci, but the stand-out name was Real Madrid’s Cristiano Ronaldo, who by himself represented €117 million of Juve’s total transfer expenditures.

Like last season, it looks like this season only Napoli will be able to keep up with Juventus, more or less. The Partenopei finished second last year with an incredible 91 points, which would’ve normally brought them the title some weeks before the end of the season, were it not for Juve’s 95 points. As it stands at the moment, Napoli is again in second place, currently 6 points behind the leader. The club saw their successful manager Maurizio Sarri leave for an adventure in south-west London, and replaced him with former Champions League winner and multiple Serie A champion Carlo Ancelotti. Furthermore, about €62 million was spent on new players, making Juve’s Ronaldo by himself twice as expensive as the entire group of new players that joined Napoli last summer. While Napoli play top class football and can threaten any team in Europe when having a good day, it seems to much to ask from them to keep up with Juventus over an entire Serie A season.