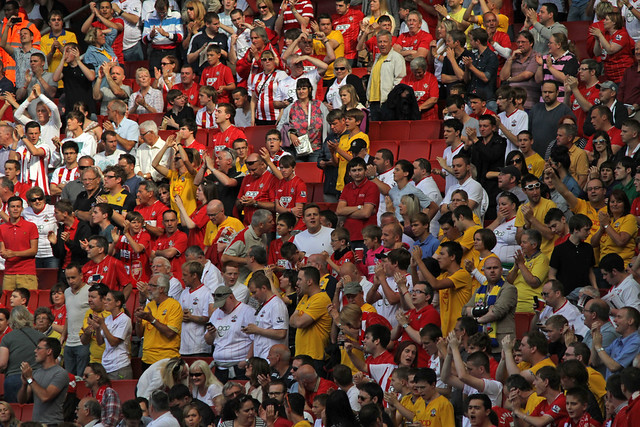 “Southampton Fans in the Premier League” (CC by 4.0) by Ronnie MacDonald

After yet another Premier League weekend filled with plenty of surprising results the 10th gameweek is upon us soon already. We’re going to have a look at some of the upcoming fixtures, taking into account the midweek EFL Cup excitement, and we’ll identify some of the most interesting Fantasy transfer targets for you to consider looking at. You should also consider looking at Mobile Casino Man for mobile casino mans’ free spins bonus news.

On Saturday a few teams have the chance to make amends for failing to deliver the goods last weekend. Arsenal, the in-form team that surprisingly failed to score at home to Boro last weekend, is visiting the League’s red lantern, Sunderland. The Black Cats have only gained a measly two points over the first nine weeks of this season, during which they conceded 16 goals and scored just 6. Arsenal will be resting some key players versus Reading in the EFL Cup, and they’ll be looking to get back to their winning ways against Sunderland. Players like Alexis, Walcott, and Bellerin are definitely worth considering for your team.

A few hours later Man United will be hosting Burnley at Old Trafford. We doubt many of you have missed the 4-0 thrashing United suffered at the hands of Antonio Conte’s Chelsea, but we believe that the Red Devils will go for the win versus Burnley. They kind of don’t have another choice if they want to avoid a new period of looming crisis, do they? Burnley is comfortably positioned at 14th in the League so far, but they have only scored 1 and conceded 9 already on the road this season. The fact that the Manchester derby takes place in the EFL Cup on Wednesday does not make it an easy week for Mourinho’s man, but then again, the Premier League is not an easy league.

Everton had a great start to this PL season, but they have been struggling a little lately. Though they are still placed 5th in the League, their latest loss away versus Burnley has raised some questions about their consistency. The Toffees do not have any midweek distractions, and they are unbeaten at home this season. Plus, they have Romelu Lukaku. Their opponents West Ham look to be on the way back after a (very) slow start to the season, with a 1-0 victory over Sunderland last weekend, their third win of the season. The Hammers do play midweek though, at home against Chelsea, which might affect their performance coming Sunday. Payet is always dangerous for West Ham, but betting on an Everton victory here might not be a bad idea, with players like Coleman and the previously mentioned Lukaku looking to earn some Fantasy points.

Gameweek 10 ends with a Monday night contest between Stoke City and Swansea City, currently the League’s numbers 16 and 19, respectively. Stoke started this season extremely slow, but they booked a decent 2-0 victory away at Hull last weekend. The squad has potential, their coach knows they can do better, and games at the Brittannia are never easy. Players like Arnautovic and Pieters might prove to be interesting differentials over the medium-term. Swansea have had a bad run lately, which saw them drop into the relegation spots, something they’re hoping to overturn with newly appointed coach Bob Bradley. His first two games showed some promise, despite resulting in only one point (a 3-2 away loss at the Emirates and an away draw versus Watford), and players like Sigurdsson and Barrow seem to be liking life under the new coach.