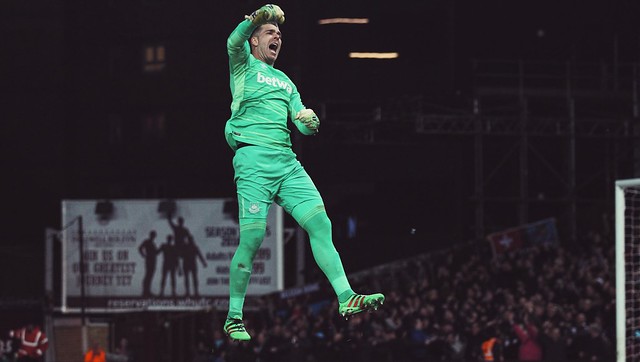 “West Ham’s Adrián celebrating in goal” (CC by 4.0) by Joshjdss

Round 22 of the Premier League once again provided us with plenty of drama and excitement, not in the last place because the season’s first double gameweek had Fantasy managers fretting over their squads more than usual with some using their triple captain card.

The title race
Looking at the table after gameweek 22 will surely have more than a few people thinking that the title race has been decided already, and even though ancient Premier League wisdom tells us that anything can happen until the end, City’s fortunes don’t seem likely to change any time soon. Punters who took Man City to win the Premier League at the start of the season, perhaps using Free Bets, must be very pleased with themselves. The Citizens are simply too good, too dominant and too free-scoring at the moment. They hosted Watford on Sunday and while the final score might not seem too impressive (a 3-1 victory), the underlying statistics certainly are. The home team recorded 15 shots of which 8 were on target and their average ball possession stood at 78% after 90 minutes of football. Watford managed a single shot on target and scored in the 82nd minute, when the damage had effectively already been done. With Newcastle, West Brom and Burnley after coming weekend’s away game at Liverpool, their 15-point lead is unlikely to shrink by much, if at all.

The situation behind City is quite different though, with just 8 point seperating second-placed Manchester United from Arsenal in 6th place. Despite considerable injury woes in defence, Mourinho’s men booked a comfortable win at Goodison Park, with magnificent goals coming from Martial (deployed as striker in place of the injured Lukaku) and the on-fire Jesse Lingard (consider him for your FPL squads!). Everton on the other hand, while defensively much improved since Koeman’s departure, will need to work on their attack during the January transfer window. To lose at home against United can be acceptable, but to fail to record a single shot on target never is.

At the Emirates, Arsenal hosted Chelsea and both teams entertained the crowds in what was probably the most attractive 90 minutes of football in this round. Arsenal took the initiative while Chelsea looked for the counter, which resulted in Jack Wilshere’s opening goal in the second half after a nice, free-flowing Arsenal attack. The Blues then reacted twice in quick succession, first through a penalty won and converted by Eden Hazard, who was by all means Chelsea’s star performer, followed by a tap-in by Marcos Alonso after a pass from fellow wingback Zappacosta. Bringing on Welbeck and Walcott, for Lacazette and Chambers, finally resulted in the equaliser for Wenger’s men as Bellerín put a cleared ball from the Blues in the back off the net from distance.

Fourth placed Liverpool, without superstar Mo Salah, managed to take away 3 points from Burnley’s tough Turf Moor after a hard-fought battle, while Spurs, without the ill Harry Kane, booked a victory over at Swansea and then followed that up with a hard-fought 1-1 draw with West Ham on Thursday night. For the Reds, Sadio Mané and central defender Klavan (with the first goal scored by an Estonian in the Premier League ever, in the dying minutes) helped overcome Gudmundsson’s late Burnley goal , while Kane’s stand-in Llorente and the in-form Dele Alli did the job for Tottenham in Wales.

The bottom of the table

Crystal Palace and Roy Hodgson deserve a shout-out. After the Eagles lost their first 7 games of the season under Frank de Boer, failing to score a single goal, they are now comfortably placed at 12th after a decent win away at struggling Southampton. Long brought the Saints the lead early on, but James McArthur, in the 67th, and Milivojevic in the 80th turned the result around. Especially for the latter this must’ve been a great relief, after failing to score what likely would’ve been a late winner from the spot at the Etihad a few days earlier.

Fellow early-season strugglers West Ham also seem on the way back, as the Hammers booked a well-deserved victory over a largely toothless West Brom Albion side. It turned out to be the night of Andy Carroll as he single-handedly undid the effects of James McClean’s first half opener, the last of his two goals coming in the 90th minute after a nice Arnautovic assist (for the FPL’ers: 4 goals and 1 assist so far).

Finally, Newcastle took away a crucial 3 points from the Bet365 Stadium as they beat Stoke 0-1, courtesy of Ayoze Perez in the 73rd minute. Seeing as the Toons had only won once in the 12 games preceeding the battle at Stoke, the points were more than welcome. They are out of the relegation zone for now, but far they’ll need to start delivering more goals if they want to stay safe. Opponents Stoke meanwhile have dropped to 18th place, but points might be on the way with Huddersfield, Watford, Bournemouth and Brighton on the calendar over the coming five rounds.