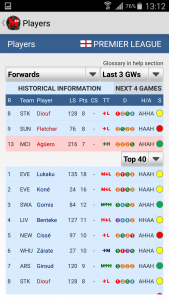 Costing only £ 1.5 (taxes included in the price), this app is free of ads and allows you to:

• Compare how your own players rank amongst all other players for each position.
• Filter player points in a flexible manner by X number of GWs (i.e. Last 3 GWs –see image).
• Plan 2, 3 or 4 games ahead including trend analysis per team (as of GW5).
• Identify your top team players and potential candidates for captain by viewing how often they have scored more than “X” number of points (i.e. 8 points and over).
• Show objective information about upcoming games per player, including team trends, team difficulty (in 5 levels) and a summary that gives you an idea of how challenging future games may be for them.
• Review and compare game-by-game point differences between teams to decide whether to add a particular player or not.
• Add players to your wish list and to your team (within the app).

Last year, this model helped move the developer’s team from about the 1,100,000th ranking to the 60,000th ranking after only started using it halfway through the season.

Hoping that you will be able to bring your game to the next level by using Fantasy Manager Premier League!

(Available for Android. An iOS version will be available in October.)

Some screenshots of the first version (1.0.0) are provided below: 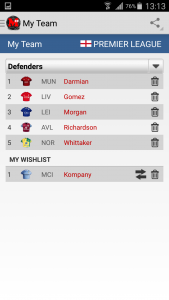 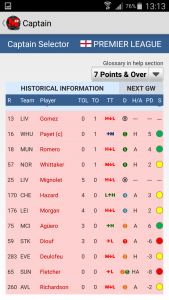 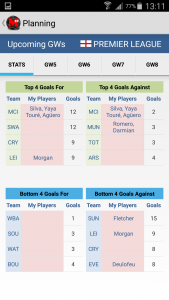 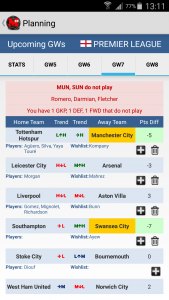