Another week, another leader: A Gameweek 12 review -
Skip to content 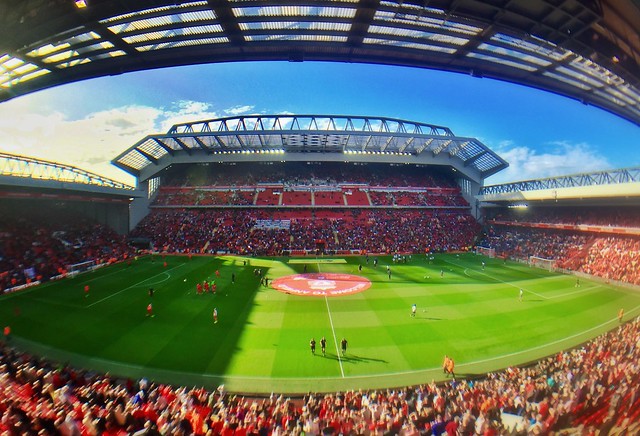 “The new Main Stand at Anfield” (CC by 4.0) by Ruaraidh Gillies

The weekend opened with the cracker between Man United and Arsenal, while it was going to be interesting to see how free-scoring Liverpool would come out of the international break. Plus, we had Chelsea aiming to extend their impressive run. In other words, plenty to look forward to, and here’s our round-up of some of the most important games. Or you could have a look at Insta Casino if you wanted more than Fantasy Football.

On Saturday the Red Devils were hosting Arsenal in what was the clash of the weekend. Mourinho’s men were without Ibrahimovic, who sat out a suspension for yellow card accumulation, and therefore appeared with supertalent Marcus Rashford at number nine, supported by Martial, Pogba in a more advanced role than usual, and Mata. Skipper Rooney was exiled to the bench yet again.

Besides Bellerín’s absence, Wenger could count on star player Alexis Sanchez who had just come back from Chili’s international break obligations. The Gunners started with him up front, supported by Ramsey, Ozil and Walcott. Carl Jenkinson replaced Bellerín on right back.

Man United, possibly a bit unexpectedly, dominated the game for most parts. Olivier Giroud’s equalising goal in the 89th minute was actually Arsenal’s first attempt on target. For much of the game, Arsenal could not show why they are title contenders. Ozil was largely invisible, while Alexis was likely still feeling the international games and the travels. In defense the Gunners were decent, though they were lucky when United wasn’t awarded a penalty after a Monreal foul on the excellent Antonio Valencia returning from injury.

United on the hand, though not spectacular either, came out of the international break seemingly untouched.
They looked solid in the back, while Zlatan’s absence was largely masked by the attacking four. Rashford and Martial caused trouble with their pace, while Mata and Pogba were dangerous with their splitting passes and shots from distance.

Mata finished a nice pass from Herrera in the 68th, before substitute Giroud, with his third goal in three matches and 61 minutes of playing time, equalised with a trademark header after an excellent centre from another sub, Oxlade-Chamberlain. Completely deserved? We’ll leave that to the professionals…

Middlesbrough – Chelsea
Conte’s men continued where they left off a few weeks ago: pressing, winning and not conceding. The 1-0 victory over Boro meant the sixth consecutive win (and clean sheet!) for the Blues. The result: top position in the Premier League, and a bunch of rivals who are starting to doubt how to exactly stop the bulldozer called Conte’s Chelsea.

In defense, Chelsea were solid (suprise surprise…) with wing backs Moses and Alonso causing plenty of attacking danger at the same time. Hazard was lightning fast and elusive as usual, though he didn’t see his name on the score sheet. Diego Costa did though, with his 10th goal of the season (in 12 games). Love him or hate him, but he’s probably the best striker in the Premier League at this moment. Kanté and Matic functioned perfectly as the double lock on the door in midfield, and especially Kanté was notably involved in the early build-up.

Boro were not bad, but just not good enough to cause Chelsea any real problems. They defended as a team, with Gibson shining centrally in the back, but the difference in quality was simply too much. In terms of budget options for your FPL squad, defender Gibson and attacking midfielder Gastón might be worth considering, though.

Southampton – Liverpool
The Reds went into this gameweek as leaders of the Premier League, after the Southampton game they now share the second spot with City. It was a one-sided affair at Saint Mary’s though, where Liverpool attacked as usual, but missed the necessary sharpness to take home the three points. Statistically, Klopp’s men showed champions pedigree: 13 shots at goal, 4 on target, 65% ball possession, and 8 corners, at a difficult away ground.

The Saints have a team that can make it difficult for any team in the League. Fraser Forster was excellent again in goal, while Virgil van Dijk keeps showing everyone why he’ll be playing Champion’s League next season. Attacking, Southampton had little to offer on Saturday, with no registered shots on target, and only 371 passes compared to Liverpool’s 663. They’ll be confident going into the next game at home versus Everton though, as well as for the away game against Palace and the home game against Boro that follow. After all, they won a point against a serious title contender this weekend.